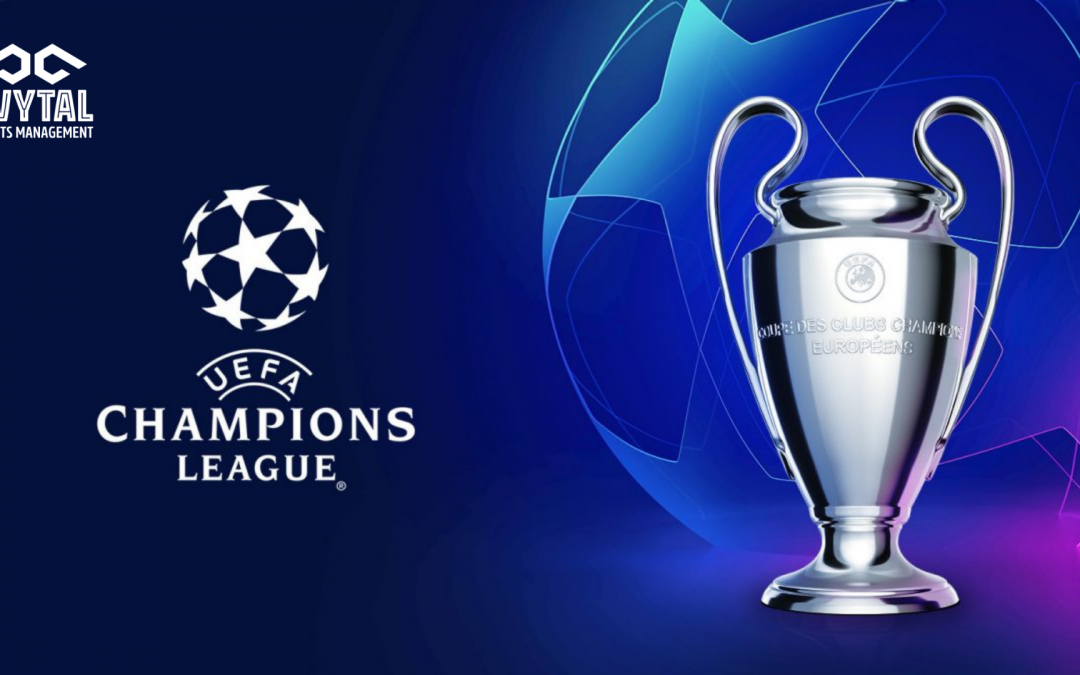 On Monday, 19 April, the UEFA Executive Committee approved the new reform of the Champions League for the 2024-2025 season, despite the creation of the Super League. This new format is the most radical reform since its creation in 1955. The last reform was in 2018. This new reform is based on the Swiss model. Conceived by a Swiss school teacher named Julius Müller, this format was first used in a chess tournament in 1889. This system was then used in various sporting competitions such as cricket, the European Petanque Championship and also for this season’s European Rugby Cup. But how does this system apply to the Champions League?

The new format of the Champions League

It should be remembered that the current Champions League operates in two phases. A group phase consisting of 32 teams, divided into 8 pools of four clubs playing round-trip matches. The second phase consists of the top two teams moving into the quarter finals. The clubs who ended third enter into the Europa League. Currently 96 matches are played between September and January with a total of 125 matches in the entire tournament. 13 matches are needed to win the Champions League. The new reform has a completely different structure. First of all, the group phase disappears, leaving 36 teams divided into 4 groups of 9 teams. In the first group, the winners of the main European national championships and the winner of the Champions League of the previous edition will be included. Pots 2, 3 and 4 will depend on the UEFA coefficient. In the first phase each club will play ten matches, five at home and five away. The eight best teams in the overall ranking will qualify directly for the last 16, while the remaining 16 teams will play a two-legged play-off. The last 12 teams will be eliminated from the competition. With the new structure, 180 matches will be played between September and January. The teams that qualify directly for the last 16 will have to win 17 matches to win the Champions League, while the teams playing in the play- off will have to win 19 matches. 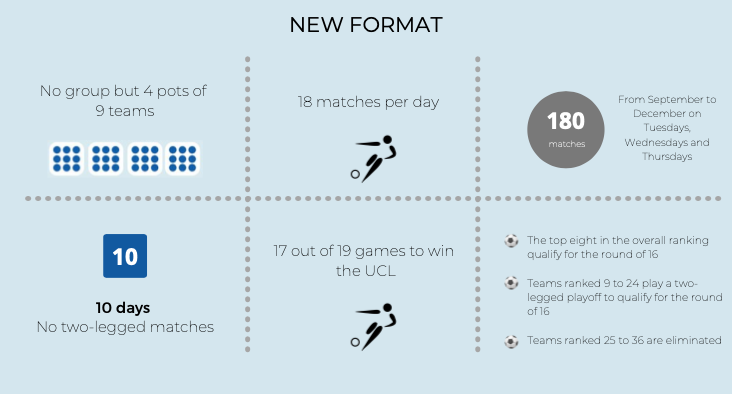 Changes from the current season

As you may have guessed, there are many changes to this championship. The first major change concerns the number of matches played. Between September and January, the number of matches played goes from 96 to 180 for a total of 225 matches against 125 before. The number of matches having considerably increased, it is therefore necessary to add one day of matches per week to the two days initially planned. This means that four more places can be added to the ranking. Who will these places go to? The distribution of the four new places is done as follows: 2 clubs will be qualified according to the UEFA coefficient ranking, one place will be allocated to the league ranked fifth in the UEFA coefficient. The French Ligue 1 is thus allocated an additional place since France is fifth in the ranking. This allows the top three teams in French Ligue 1 to qualify and a fourth place will be decided in the preliminary round. France is therefore the main beneficiary of this change. Finally, another place will go to the best league without a representative. 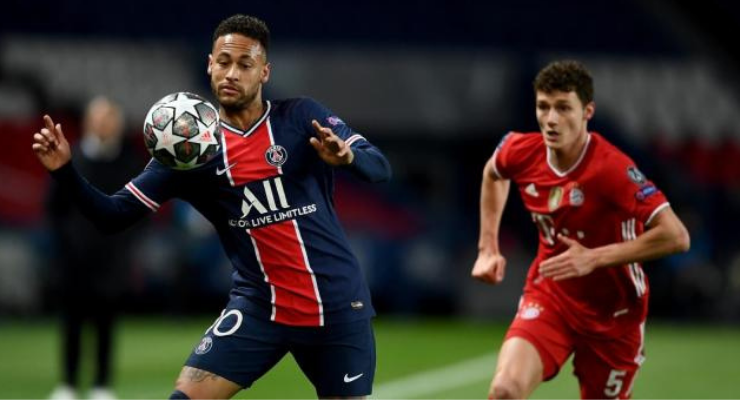 There are many advantages to this new system. Due to the large number of matches, the ranking will be complete. Indeed, during the group stage, each team will meet 10 different opponents, which will allow the spectators to have a great variety of matches and, in particular, to see more matches against big teams. In addition, the numerous matches will allow UEFA to increase its TV rights revenues. Finally, this new format allows for flexibility in this championship, it is possible to change the number of participants or matches without changing the overall formula. However, this new format poses a problem in terms of scheduling. Indeed, having the number of matches almost doubled and adding an extra day per week, the football calendar risks being overloaded. It is, therefore, important for UEFA to find solutions to organise all the matches. Some solutions have been suggested, such as eliminating some national competitions or reducing the number of clubs per league from 20 to 18. These solutions are not favourable to local clubs, who see championships cancelled. These leagues are important for them because it allows them to progress and it is a source of income for them due to television rights. So there will be less money for local clubs. Will this new format destroy the future of local clubs at the expense of the big clubs?

Impact of the Super League on the Champions League?

The creation of the Super League has shaken up the world of European football. The new competition, which was made official on Sunday, would disrupt the smooth running of the competition. Indeed, the twelve founding clubs are pillars for the Champions League because they are big clubs, offer excellent quality of matches to the spectators and raise this competition to a high level. Without them, the league would lose all its prestige and popularity. Many players, clubs and organisations have expressed their opposition to the new league. UEFA has threatened to exclude the twelve founding clubs from all European competitions. The exclusion would disrupt the current season. UEFA Executive Committee member Jesper Moller said yesterday that Chelsea, Real Madrid and Manchester City, three of this season’s four Champions League semi-finalists, should be excluded from this season’s competition because of their participation in the Super League. It is possible that several teams could be drafted in to complete the final four of the Champions League.

Lionel Messi was successful in adding a maiden international trophy to his collection few days ago in turn helping Argentina to win their 28-year long wait for a silverware. Adding this victory to his individual performance’s throughout the domestic season with...
Lees meer