Women’s football has continued to evolve in recent years, with women referees beginning to make their mark in the very male-dominated world of football. More and more women are refereeing big men’s matches. Indeed, the share of female referees in France is 20% for all four disciplines (Rugby, Handball, Basketball and Football). Of these, only 4% referee football, and few women referee men’s matches and even fewer at world level. However, some women are making a difference and making the world of football more accessible to women.

At 37 years old, French referee Stéphanie Frappart has an extensive experience in refereeing. Playing football at a young age, she quickly turned to refereeing, which offered better professional opportunities. In 2014, she refereed for the first time a men’s match in Ligue 2, and then the list of achievements went on, as she became the first woman to referee men’s matches in numerous championships: Ligue 1 (2019), UEFA Supercup Final in Istanbul (2019), Nations League (2020) and Champions League (2020). In addition, Stéphanie has refereed numerous international women’s matches, such as the 2019 World Cup final between the Netherlands and the United States. Stéphanie was elected best female referee in the world in 2019.

Edina Alves, a 41-year-old Brazilian, also has an extensive experience. In May 2019, she became the first woman to referee a men’s top flight match in Brazil, in the Brasileirao match between CSA and Goias. Then in 2021, she became the first female referee to officiate at a major men’s competition organised by FIFA, at the Club World Cup.

In addition to Stéphanie and Edina, the German Bibiana Steinhaus was the first woman to referee a men’s match in the European championship, during the Bundesliga in 2017, and also the Swiss referee Nicole Petignat, who refereed in the UEFA Cup in 2003, currently the Europa League. 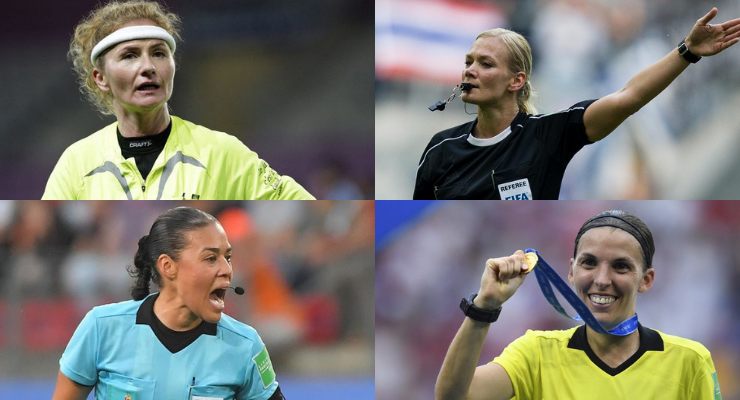 Why are there fewer women referees than men?

There are several reasons for the minority of women referees in football. As you know, football is a very masculine sport, and despite a strong evolution in recent years, being a woman in football is not always easy.

To be able to referee at a high level, especially men’s matches, you have to be physically fit and pass the entrance test, but also get past the sexist remarks that they may encounter throughout their careers. Regarding the entrance test, before you had to pass the Cooper test, a test based on endurance where you had to run 2800m in 12 minutes. For this test, minimal differences between women and men were tolerated, but the tests have evolved, the Cooper test has given way to the Werner Helsen test, a test based on a series of sprints where the difference between women and men is no longer tolerated as it was before. It is easier to progress on endurance than on sprinting, which makes this new test more complicated.

Women referees are more respected when they referee at a high level. As Stéphanie said in an interview: “You have to be passionate to do this job. At the lower level, you can be insulted every weekend before you go home”.

This is reminiscent of the controversy last February during the ceremony following the World Cup final between Bayern Munich and Tigres de Monterrey (1-0) in Doha. The ceremony was attended by a member of the Qatari royal family, who refused to clap the hands of the women referees after they had received their medals. Human rights and women’s conditions are often denounced in Qatar. This gesture goes against the values of FIFA, which throughout the World Cup has promoted women referees.

In the meantime, we hope to see more women referees in men’s football and that they are just as respected as men in this profession.